First of all, thanks for waiting around for me to remember that I have a blog and write something new on it. I didn’t actually forget to write a post, I just didn’t care enough to write a post. Last week’s whirlwind trip to NY for work was a confusing blur of rubber galoshes and Irish bars. With work thrown in just to keep it real.

I got home from NY very brain-fried and tired, only to discover that my husband had done THIS to our kitchen while I was gone. 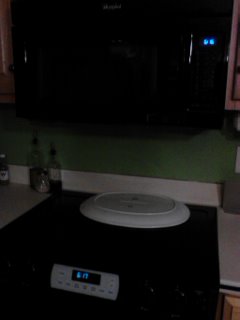 Yeah. Stare at it for a while and let it break your heart, too. What? You don’t see the problem? Keep looking.

HE CHANGED THE MICROWAVE AND BOUGHT ONE WITH BLUE NUMBERS INSTEAD OF GREEN ONES! NOW THE NUMBERS DON’T MATCH! WHAT AM I SUPPOSED TO DO WITH THAT???

(UNRELATED NOTE: I learned over the weekend that those three little question marks in a row are called an “interrobang.” Well, it’s only three question marks if you’re an angry 13-year-old girl. In grownup land, it’s actually just one question mark followed by one exclamation point. But isn’t interrobang the greatest word? It’s going to be the name of my new band, if I ever start a band or learn to play an instrument.)

But oh my gosh he changed the microwave! Yes, ours had broken, per my last post about blue flames bouncing around inside of it whenever I turned it on, but he bought mismatched LED displays! Does the man know nothing about aesthetics or about what’s it’s like to live with a crazy person? Despite my gratitude at the great difficulty he went to in order to install that behemoth of an appliance (we’re going to ignore the pillow that he suspiciously set on fire during the installation process…even though it was my pillow), I simply cannot use mismatched appliances. Since I would never dream of asking him to undo all that work and take that very heavy thing back to the store, I’m going to need him to either buy a new stove to match it, or stop eating since I won’t be cooking with either of the mismatched appliances.