See? I know what you were thinking. You were hoping against hope that today might finally be the day when I go all Michael Moore on you and you can think,”Lorca finally stopped being such a weirdo and started to take a serious look at the state of the country.” Well, I am. Not being weird, I mean. So there. Pffffft. I’m taking a stand against shopping cart corrals.

This is too a serious issue, just ask all the people who obliviously go about their business, doing a little shopping, not hurting a soul, only to get into their cars and slam ass-first into the little robot that zooms around the parking lot, scooping up all the shopping carts.

See? I know what you’re thinking again. NOW you’re thinking, “Well, there’s no way Lorca is going to write a serious post about anything, especially now that she’s hallucinating about robots zipping around a parking lot.” Well, joke’s on you, buster, I happen to know those little robots are real because I backed my car into one! So there! Pfffft again!

(NOTE: I get it that you might be inclined to think I’ve been drinking since I claim to have run over a robot while doing my grocery shopping, but I swear it happened.)

(NOTE PART II: I’m not sure I’m really making my case here with all the spitting at you going on, and I really apologize for the spitting, but I’ve just learned how you would type the noise that spitting makes and I’m having too much fun to quit. See? PFFFT! I can’t help myself.)

I really did back into the shopping cart scooper robot, and the thing about that stupid robot is we wouldn’t even need it if people would just take their carts back to the store. But THIS has got to be the worst case of shopping cart corral abuse I’ve come across: 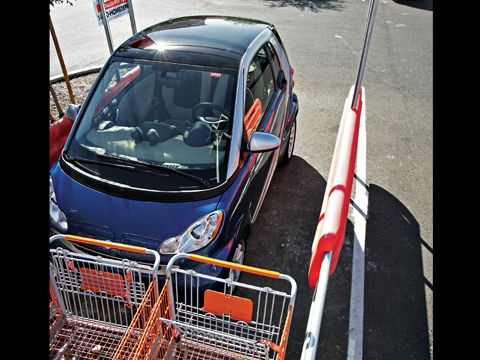 The only real abuse going on is from me. I know that guy, and I punched him in the head for parking his car in there. Has anyone else taken issue with the fact that he not only wedged his car in there, but that he actually had room to get the doors open? It’s like this guy now has an Ironman suit around his car, protecting it from people who back over robots. That is unacceptably unfair. His car gets to sit in its own little shark cage while the rest of us take our chances with being dinged and smashed. I, for one, am going to go spit on his car, now that I know how.