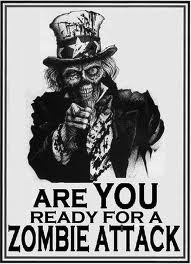 I know what you’re thinking. “Here we go, ANOTHER post about the zombie trend.” Way to judge the book by its cover. Or the blog post by its cover. I mean, title. Just keep reading.

Like many of you, I’m a little tired of zombies. ‘Course, I was tired of them after the third reference to the zombie apocalypse. It felt so forced. First we had the vampire craze, but I kind of got that because people have thought vampires were sexy ever since Bela Lugosi fanged his way into Hollywood (we especially like vampires with receding hairlines and incomprehensible accents). Then the werewolves came along, thanks to one particularly bad series of teen heartthrob movies that shall remain nameless.

And just like all things American, once we got tired of the shiny (or fangy/furry) new toy, we went on to the next big thing. Zombies. Or functionally deceased, as they apparently prefer to be called. You couldn’t swing an undead cat without hitting some reference to the coming zombie apocalypse. Don’t believe me? Check out the CDC’s guidelines on being prepared for the zombie uprising. Wish I was kidding there.

And while all of the crowd-followers were peppering their daily conversations with zombie references, nobody even gave a second thought to how these monstrosities are going to affect our daily lives. As if the economy isn’t in bad enough shape, people want to go bringing extra mouths to feed into it? Zombies had the courtesy to die off once and make room in the population, and society wants to bring them back? That is going to shatter our unemployment rate.

Our schools are already over-crowded, but now we supposedly need undead children taking up more space. And since they are technically not living, I’m willing to bet the government is going to consider zombie babies to not be actual members of the student body, meaning there will be no hiring of additional teachers to handle the overload.

And where are the environmentalists who should be protesting on this issue? Not only are the zombies going to add to the carbon footprint (those things are slow movers…they’re going to have to drive to the ends of their own driveways, just to get the mail), the methane given off by hordes of rotting undead corpses is going to blow our greenhouse effect into epic proportions. And now that these creatures are not in the ground where we left them, effectively fertilizing the soil, our plant life is going to go down the drain.

If there has to be an upside to zombie invasion, there are some potential benefits if we take full advantage. The real estate market could benefit, since these things will have to live somewhere. And if we could put the undead to good use in our law enforcement and criminal justice areas, it could result in a drop in the crime rate. If we could just convince the fashion industry that zombies already don’t eat and don’t need to be paid much, we could potentially see the end of those supermodels. (I’ve already thought of that…we can’t feed the supermodels to the zombies because the undead apparently subsist on brains. Ditto Congressmen as a food source.)

The truly alarming thing about the trend is if we will willingly embrace rotting monsters as the next It Girl, it kind of makes me fear what we’re going to glorify next. Aliens? Sea Serpents? Republicans? I shudder to think.

3 thoughts on “Zombies: Friend or Foe?”